Share All sharing options for: Jenkins Is Biggest Loser 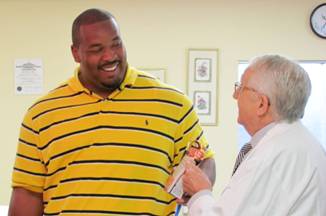 Kris Jenkins won the three way competition among himself, Rex Ryan, and Damien Woody to lose the most weight by the start of training camp.

New York Jets defensive tackle Kris Jenkins was just announced the winner (as training camp begins today) of the challenge by losing 33 pounds compared to 26 pounds for Woody and 20 pounds for Ryan.

A four-time NFL Pro Bowl athlete, Jenkins weighed 390 pounds at the start of the competition and now weighs in at a lean 359 pounds. To help ensure his victory, Jenkins had recruited renowned physician, author, and weight-loss expert Dr. Sanford Siegal and followed the Miami physician's popular Dr. Siegal's Cookie Diet weight-loss regimen.  "I'm a very competitive person so I'm not surprised that I won, but I can't believe I won with the help of cookies!" said Jenkins shortly after the final weigh-in.

As backgrounder, in May, Coach Ryan challenged teammates Damien Woody and Kris Jenkins to join him in a three-man competition to see who could lose the most weight prior to the start of the Jets' 2010 training camp. The Jets wanted Jenkins to lose about 30 pounds so that the anchor of their defense would be at maximum speed and peak performance.  As an incentive, Ryan, Jenkins, and Woody agreed at the outset that the two losers would make a generous donation to the winner's designated charity.

However, Jenkins is just one of millions of success stories of Dr. Siegal's Cookie Diet weight-loss program, created 35 years ago by Sanford Siegal, D.O., M.D., in order to control his patients' hunger and enable them to stick to a reduced-calorie diet.

I love stories like these of guys doing good things for themselves and others. I'm going to try and get more information on this cookie diet.