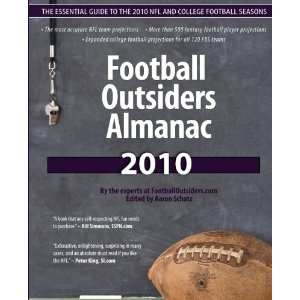 Bill was kind enough to answer a few questions pertaining to the chapter he wrote on the Jets.

John B: You note that in a vacuum teams with pass defenses as good as the Jets had last year tend to regress. How much do you think the additions of Antonio Cromartie and Kyle Wilson to the secondary, guys who appear to fit the system well, can help mitigate that?

Bill Barnwell: Well, I think there are issues with each. Cromartie just hasn't been very effective as a pro cornerback outside of his one year with the 10 picks, and he has injury issues going back through college. Wilson's definitely a talented player, but he's a rookie; rookie cornerbacks really tend to struggle before maturing. Honestly, I think that they'll both look better across from Darrelle Revis, but I think any cornerback fits the system of playing across from Revis.

JB: You mention what Mark Sanchez did as a rookie resembles quite a range of rookie years from JaMarcus Russell and Ryan Leaf to Troy Aikman and Peyton Manning. Is there any sort of way to model how a quarterback will progress after his first year, or is it a crapshoot? What is your best guess on the kind of second year Sanchez will have?

BB: I think Sanchez presents such a unique situation that it's really hard to project his performance. Last year, we took a lot of flak for noting that Sanchez's stats were similar to the stats of JaMarcus Russell at the same age (in his second season). It's even worse you can consider that Sanchez had a far better running game around him and more weapons than Russell did. On the other hand, though, Sanchez is unlike most any quarterback of recent vintage; he barely played at USC, was really good when he did, and is obviously still learning at the pro level.

I would say that the range of quarterbacks Sanchez can be is still so wide that it's impossible to say what sort of player he'll end up being. This year, you'd expect a decline in his interception rate and an increase in his yards per attempt, since he has so many downfield weapons. I wonder if the expected injuries on the offensive line will increase his sack rate, though.

JB: How do you think the return of Kris Jenkins from injury will impact the Jets?

BB: I was really expecting their rush defense to decline when Jenkins went down, but it stayed exactly the same without Jenkins in the lineup. That's a credit to last year's team, but it also makes me wonder how much impact Jenkins really had. I'm going to say that it really won't end up being much of a difference, and Jenkins is always a threat to get hurt again, anyway.

JB:  I tend to be in the minority on Gang Green Nation in thinking LaDainian Tomlinson does not have much left in the tank. A lot of our readers point to San Diego's run blocking? What were the causes of the back's recent struggles? What kind of year do you see him having?

The run-blocking certainly wasn't very good, but Tomlinson has clearly lost a step. He's lost his confidence -- he's indecisive on hitting the hole nowadays, and he doesn't have the speed to break away from linebackers and safeties at the second and third levels. I see him being a part-time player that uses his brain to serve as an effective blocker and receiver, but I don't see him being an effective rusher.

JB:  A lot of our readers were upset the team let Jay Feely walk over the offseason and replaced him with Nick Folk. One thing to note, though, is the Jets used Feely's slot under final eight provisions to sign Jason Taylor. What do the numbers say? Are the Jets stronger with Feely or with Folk and Taylor?

BB: We've found that field goal conversion rate is almost totally random from year to year, and Feely's average at best on kickoffs, so losing him is no big deal. Unfortunately, Folk is one of the worst kickoff men in the league, so signing him was the wrong move. I would definitely take Taylor over Feely, but I'd prefer Taylor and (insert rookie with a strong leg here) over Taylor and Folk.

Many thanks to Bill for taking the time to chat with us. To be honest, I think he is way too negative on the Jets. Mark Sanchez isn't JaMarcus Russell. It was more about Sione Pouha stepping up, not Kris Jenkins being irrelevant. Cromartie and Wilson are both best at man coverage, which is what the Jets play.

Despite disagreements on matters of opinion, I have a world of respect for Mr. Barnwell. His work is very thought provoking and reasoned. He gets you thinking, even if you disagree, which is really the point of sites like ours and Football Outsiders.

Again, it's $21.95 at Amazon.com. You'll learn a lot about the league, particularly other teams. You'll get into the mood for the season. You'll also help out the friend of the site who wrote the book. It's a good work.