Chad "Ocho Cinco" has been tweeting away since the T.O. signing, and is already talking the Bengals up for next season.

With the recent acquisition marriage of Terrell Owens and Chad Ocho Cinco, the Jets may have to re-think their gameplan for the matchup on Nov. 25 (smirk). Remember, last season these two COMBINED for just 8 catches/72 yards in four games against them, that's an average of two catches and 18 ypg. Also, who can forget the glorious week 17 when "No Show Cinco" was blanked after trying to invade Revis island via Twitter before the game.

Here are some of his gems:

#OCNNBREAKINGNEWS My homeboy is a Bengal, all of our games have been moved to pay-per-view, you got to pay to see this shh!

I bet i won't see all them damn double teams now! Cedric Benson could have a 2,000 yard season with the attention we gonna command

Lastly, Ocho Tweeted this cute little silhouette of him and T.O.. That's all well and good but, what to name it? Help me out GGN! 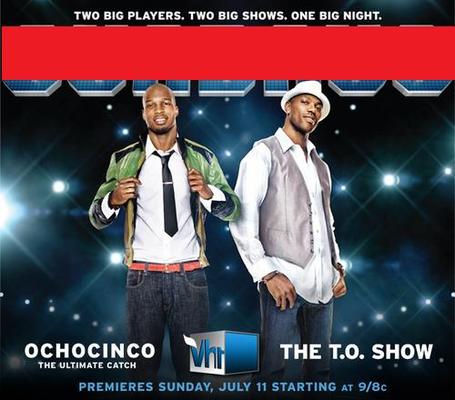