UDFA Round Up So Far

Share All sharing options for: UDFA Round Up So Far

Updated to include: Joel Rivera WR

Here we have all the players that several publications are reporting we have signed as UDFA, I will link to where I saw that we had signed them with each name:

Join after the jump for a more detailed look

A highly touted junior prospect who probably came out a year too early, bad for his bank balance but good for our team. An extremely physical player who likes to get his hands on receivers. Give him a couple of years before you expect the best, but this could turn into one of the best steals we have ever gotten from a draft. He expected to be a top three round pick. I had him as a 2nd/3rd round prospect.

Jaosn Lamb is a big body, unfortunately he underwent shoulder surgery towards the end of last year which caused him to miss Baylor's main pro day. He is healed and ready to go now however. As a senior he recorded 32 tackles 7 of which were for a loss, and tallied 3 sacks on the season leading all Baylor Bears. He is also valuable on special teams in terms of kick blocking having blocked two in one game against Kent State in 2009

Not sure how much of an impact he will have. However under Rex Ryan any rookie has a chance to make the team.

When you first look at this signing your obviously going to look at his height (well after the profile picture). I was a little worried with that until I read this article about how he intends to prove that height isn't everything. He seems to have an excellent work effort a good attitude and to top it all off he was extremely productive at Pittsburgh. He is active against the run and the pass as well as having a high motor. There really is nothing to not like about this UDFA pick-up. 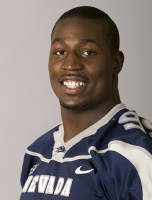 I made the mistake yesterday of using the official Nevada athletic site to get his weight which is listed as 240lb's. Thanks to Crackback, I realized that the site had not been updated for the 2009 season. CBS has him at 258 which is a lot better for a 3-4 outside linebacker. Basped has a good reputation with Nevada fans and his speed off the edge is the reason why. Most have him suited as a 3-4 pass rush specialist in his first year. His technique is sloppy, but he can use that speed to get around the outside shoulder of the tackle. He also has good length to use his arms, something he does but needs to improve on. I think the bottom line with Basped is that he has a good frame and a lot of potential, he just needs to put it all together.

It's hard to really analyze a player that you were never really looking out for. I watched a lot of Texas football in 2009 but I don't remember ever hearing the name Charlie Tanner. As an offensive lineman that is probably a good thing, it means he didn't allow Colt McCoy to be sacked all too often. He started 13 games at LG in 2009 for the Longhorns receiving the Boss Hog award for the most productive Texas offensive lineman (second time he has won the award). From what I can gather he is an excellent run blocker who may need to work on his pass protection at the next level. However he comes from a prestigious program where he had success. We were looking for depth on the offensive line and Tanner may well offer that

Another big body for the offensive line, he is described as a big strong consistent offensive lineman. He ran a 5.45 and 5.53 in the 40-yard dash, a 4.70 short shuttle, a 7.95 three-cone drill, a 28-inch vertical jump, a 7-foot, 3-inch broad jump and did 24 bench press repetitions at the North Dakota pro day. Started at right tackle in 2008 but moved inside to guard for his senior season in 2009. Outside of that I can't seem to find a great deal of information on Buckman. Again any player can make an impact if they show up to play so it's good to have him with the Jets and hopefully he can push the other lineman in camp.

I really couldn't mind too much on Kirkland, other than he ran a 4.59 40. His university page doesn't hold a great deal of information, so it will be a wait and see on this one.

I had no idea that Cory Reamer had not been selected in this draft. I absolutely love this addition to the Jets. He can play either strongside or weakside linebacker, and in the 3-4 I think he could do a job inside as a middle linebacker. He has good speed and his tackling is top notch. He continuously got applauded for his dedication and work ethic while at Alabama. This is a Rex Ryan type of guy if I ever saw one, he plays the game the right way and is dedicated to getting better. Anytime you get serious playing time at a program like Alabama you know you have some talent. I fully expect Reamer to make the team, and I also expect him to be one of the best special team contributors in 2010. His tackling will make sure of that.

Ezeff started 7 games in 2009 collecting just 28 tackles and nothing else. A strong safety prospect who played the entire 2008 season at SS intercepting 3 passes while racking up 66 tackles. Ezeff is a real athlete who ran a low 4.4 in the 40 this year. Known as a leader on the field with good instincts, speed and sound tackling ability in the open field although the Jets have only offered a try-out, he may be one to watch.

Jeff is an athletic tight end who offers you a combination of size and speed. He is a decent blocker and can catch a pass or two. He was used mainly as a part time player while at Illinois. He definitely knows how to use his size as an advantage to get in between the defensive backs and the football. Not sure if he has a future playing at the next level. Cumberland ran 4.46 in the 40, was credited with an impressive 35.5" in the vertical leap and bench pressed 225 pounds 20 times. Impressive numbers but he has to prove to scouts he can catch consistently and remained focused throughout. He does however make a nice red-zone target. 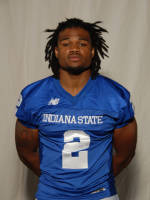 A player who by his own admission can play free safety spot as well as help out on special teams. "According to Gil Brandt on nfl.com, the 5-foot-11, 209-pound McCleskey ran the 40-yard dash in 4.43 and 4.47 seconds, bench-pressed 225 pounds for 18 repetitions and did a vertical jump of 36 inches this spring". In 2008 he was named a team co-captain, he says that regardless of what happens with his football career, he would like to complete his degree in the future. Not seen him play, so will have to wait for rookie mini-camp to hear about his playing style 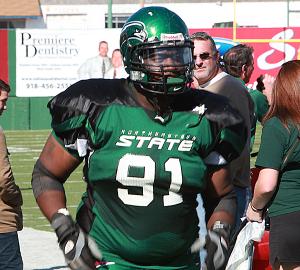 Again not much information on T.J Raymond right now, will add more when I find it. I can say that he had 54 tackles in 2009, and like the Scout.com article said, he was a three time lone star conference selection. He had 62 tackles, including 13 for a loss as well as 5 sacks in 2008. A transfer from North Texas university, T.J provided a stout anchor for Northeastern state. 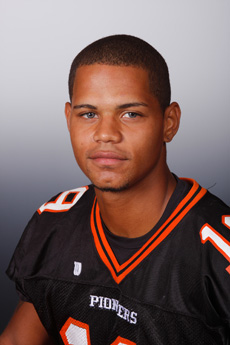 Joel Rivera has been offered an invitation to Jets rookie mini-camp next week according to Manish. He caught 51 passes for 751 yards in 2009 including 9 touchdowns. He also returned 11 kickoffs for a combined 177 yards. An All-NJAC selection for the second year in a row. In 2008 he caught 74 catches for 965 yards, both school records as well as catching 7 touchdown passes. Here is a great article I found at NorthJersey.com by Tara Sullivan about Joel and his aspirations to play in the NFL.