Share All sharing options for: The Story Behind Nick 'Iron Man' Mangold 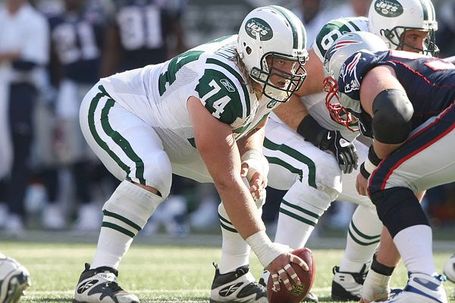 Durability: One of the most prominent traits an athlete can possess.

Guys that not only have the moxie to give it 110 percent every time they step foot on the pitch, but also have the durability to start every game year after year. It is very rare for football players to belong to the elite perfect attendance club. Playing in the NFL is both physically and mentally grueling.

Nick 'Iron Man' Mangold hasn’t missed a single game since entering the NFL in 2006 ---playing in all 68  games as a member of Gang Green. In college, while attending THE Ohio State University, he logged 300+ minutes in each of his final three seasons.

Follow me after the jump, as we discuss Nick both on and off the field -- and how he has blossomed into one of the leaders on this New York Jets football team so quickly.

In 2005, Jets veteran Pro Bowl center Kevin Mawae suffered a very serious injury (torn tricep) midseason which forced him to miss the remainder of the year. He was placed on injured reserve, and even though he was a great asset to the Jets for many years, the organization was forced to release him shortly after the season ended.

Lucky for them, they had the 4th  and 29th  overall picks in the first round of the draft that year, and offensive linemen D’Brickashaw Ferguson and Nick Mangold were available.

Leading up to the NFL Draft that year, the Jets had been eyeing the OSU Center (Mangold) since his spectacular showing at the 2006 Senior Bowl just months before. They were set on drafting young talent to play with veterans Brandon Moore and Pete Kendall, and they did just that --- using both of their first round picks to draft Ferguson and Mangold. In the offseason leading up to the 2007-08 season, when Kendall was crying and disputing with the Jets organization over monetary issues, he was shipped to Washington just before the season was to start.

That move told me the Jets confided in Mangold.The rest ... is history.

FROM BIRTH TO HIGH SCHOOL:

Nick Mangold was born on Jan. 13, 1984, in Centreville, OH --- the same hometown where Mike Nugent and Ohio State teammate AJ Hawk grew up.  He began playing football in the third grade and attended Archbishop Alter High School in Kettering, OH. A ‘jack of all trades’ if you will, as he was a letterman in football, wrestling, and track & field. He made the All-Ohio team in 2001 and played in the 2002 U.S. Army All-American Bowl.

Nick was a business major at OSU and a three-year starter for the Buckeyes. In 2003, by the second game of his sophomore season he was already starting at center when former center Alex Stepanovich went down with a knee injury.

As mentioned above, he logged over 300 minutes of action in each of his last three seasons at Ohio State. He earned All-Big Ten honors in his junior and senior seasons. During his final year at OSU he was phenomenal and served as the Buckeyes’ co-captain. He did not allow a single sack that entire season, and was an Outland Trophy finalist as well as a finalist for the Rimington Trophy. Stud.

What makes him (arguably) the best center in the NFL?

Nick is looking for a long-term deal as he is set to become a UFA in 2011 (assuming the NFL returns to the salary cap).  Hence, Mike T., if you’re reading this, please get on the phone and cut this man a lengthy deal!

So what are you waiting for? Do yourself a favor, and follow him on Twitter here. You can chat with him, find out what charity events he’s currently engaging in and get a great laugh as well – the dialogue between him and TE Dustin Keller is hilarious.

A workman on and off the field, Mangold rarely ever misses a day of work.