Trusting The System: The NFL Scout

Share All sharing options for: Trusting The System: The NFL Scout

Seven rounds pass and then it's back to square one. The life of a pro football scout, they don't have time to sit back and marvel in their work. Once the recommendation has been communicated, the big board set, the selections made, those players are handed over to the coaching staff. The scout, who you very rarely hear about, retires to his hotel room, grabs a map and gets ready to start his journey all over again. Tens of thousands of miles travelling, accumulating in the grand finale of the selection. General Managers will get the credit, they will take the fall, if a player turns into a star, people will say "the Jets did a good job there", the scout is Mr/Mrs anonymous. Only those who choose to dig deep will ever find the name of the person who recommended Jerricho Cotchery in the fourth round.

Pollution of the draft process is rife everywhere. You have opposite forces arriving at the same destinations, on the back of taking two very different journeys. On one hand you have the scouts and Joey Clinkscales, the Jets vice president of college scouting. On the other you have the General Manager, and the current coaches on the staff. Sometimes they will reach the same conclusions, a lot of the time it takes some considerable persuasion one way or the other. Usually coming from the scouting side to the management side. Sometimes for the best, other times not so much.

Every now and again you will hear of a war room story. An office that is busier than the Presidents on draft day. We heard how Mark Sanchez became a Jet, all the individual aspects that needed to come together to complete a first round jigsaw. We also heard of the Shonn Greene war room story. Greene ranked 19th on the Jets big board was still sitting there at the end of day one, much to the surprise of a lot of people. The Jets had already pulled off a big trade, and you can understand the reluctance of the General Manager to want to make another move.

This is where the persuasion of hard work comes in........

It was the hard work of several scouts that helped induce Tannenbaum into pulling the trigger on a deal that looks to have been a good one. We have all heard the old chestnut "four eyes are better than two, eight are better than four". Well try twelve. That's 6 individual scouts who submitted reports on Shonn Greene. Culminating in him being given a 6.25 final grade, equating him to a mid first round talent, and the third best running back in the class.

Still, knowing this Mike Tannenbaum needed persuasion. There is a reason why Mike wears the suit, he is a business man, he knows numbers, he knows value, he knows salary. Scouts know players, and their report was so positive about Greene, the big guns were sent into action. Senior personnel executive Terry Bradway, and Vice President of College Scouting Joey Clinkscales. As day one closed, the GM parted with a 'It's not happening' flick of the wrist.

Disappointed but not defeated, Bradway and Clinkscales returned home. 7:00am next morning they were back at it. Think flies at a BBQ, think that piece of chewing gum clinging to the bottom of your shoe, that buzzing in your ear. We have him as a first, here he is in the 3rd, look at the reports, look at the board, look at the tape, look at something and swat us away if you dare. Finally Tannenbaum caved.....

"It was like capitulating to your kids," Tannenbaum later recalled

"If you pick the best player, you can't go wrong," Rex chimed in

"They double-teamed me," Tannenbaum says now. "Eventually, they wore me down."

He picked up his phone and dialled in to the Detroit Lions. The deal was there, it was complete, Shonn Greene was a Jet, and I would say the thanks should go to the six scouts who took extensive road trips, stayed behind after games to see the character of a player. Put together the scouting report, and then sent it to the powers that be to present the case to the supreme beings that inhabit the front office.

Too many times the decision process becomes polluted by combine numbers, like one AFC scout explained:

"The coaching staff goes into the process backwards. We watch all that film first and then see them in shorts and at the combine and try to confirm what we saw them do on the football field. Coaches get their first look at these guys at the Senior Bowl and the combine, and then they go back and watch film and try to confirm those impressions. But everything they see on film has been skewed by what they saw in the workouts."

When judging a player with prolific size and speed who wasn’t especially adept at making plays in college, coaches are known to rationalize the discrepancy by concluding that their collegiate counterparts were to blame. Says an NFC scouting director: "Coaches always say, ‘He wasn’t coached right. I’m the one who can bring it out of him.’ And they’re usually wrong. The sad thing is, when they get to the NFL, sometimes these guys get the least coaching of all."

Scouts are sent out for a reason, they have been hired to judge talent, to evaluate it over a period of months. Coaches have a habit of judging it over a period of weeks. Scouts are the guys that turn up early to see how players warm up, speak with coaches, fans, secretaries, anyone they can get a hold of that may offer a glimpse into the player they are interested in. Are the players taking warm up seriously, are they listening when the coach is speaking, during the game are they with the team mates working on the sideline. After the game do they celebrate with the team, do they keep themselves to themselves. These are all the questions that scouts need to answer on top of player performance evaluation:

"I think you’ve definitely got to be careful. Coaches should have input, but they bring a whole different line of thinking to the process. Sometimes before a draft, the personnel guys and I would leave the meeting room at night and come back in the morning and all the cards had been moved around. We’d say, ‘Damn, there must have been a couple of more all-star games in the middle of the night we didn’t know about.’ 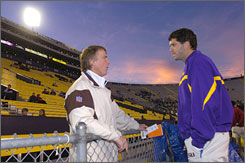 Bob Morris talks to a L.S.U coach as part of his scouting duty in 2006 (via USA Today)

Bob Morris a long time scout understands that that with some schools, you are not always going to get the full truth and nothing but the truth. In a family atmosphere that some schools operate, it very much is look out for everyone, and distinguishing fact from fiction is one of the tougher jobs presented to the scout. He has to have faith in his own ability to seek, see, and evaluate the truth.

The scouting process is pretty much a year around job, right now scouts across the country are presenting several years worth of scouting on several players to the head of scouting at their respective teams. As the draft comes and goes, they will sit and watch to see which players their team select and which players are off to another team. The players will then be taken in by their coaching staffs and the burden is passed from scouts to coaches. While the coaches look towards spring practises and the long path ahead.

• Visits to the NFL club city
– Approach
– Preparation
– What to expect

Like Make Tannenbaum was told during those agonising few hours before day two of the draft which resulted in the drafting of Shonn Greene. Trust the scouts, trust the board, trust the system, and trust your employees. We all heard the rumours about Gholston being a Mangini pick, obviously the GM has to take some serious heat for that as well. However it would not surprise me, some coaches think they know better, and obviously they will have a say. However they need to remember why teams hired these scouts, it was to evaluate extensively players the coaching staff don''t have time to.

Unheralded hero of draft day, the chef who works tirelessly to bring together all the right ingredients to make a great dish: the NFL Scout.