Share All sharing options for: Film Breakdown: The Final Play

I've gotten a pretty positive response to these, so I'll keep churning 'em out till you get bored with them. This week, we break down the play that almost gave us heart attack, the final play of the game against the Steelers last week. This defensive call drops 8 men in coverage, very un-Ryan like, but the right call against a guy like Roethlisberger.

We start with the Jets in a dime; one linebacker, 3 linemen, the rest are DB's. Revis and Cromartie, circled, are in man to man with Wallace and Ward. Everyone else, save the three rushers, will drop into coverage. 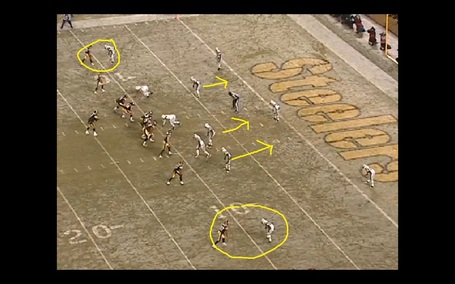 Pittsburgh sends as many people as possible in patterns. Roethlisberger has time, but coverage is good, save the one circled reciever over the middle.

Check out the rest of the play after the jump:

The Jets are in a Cover 2, with man to man on the outside. This leaves a hole that SS Dwight Lowery is late covering. Good thing Sean Ellis is in Roethlisberger's face before he finds the wide open receiver. If Ellis does not get pressure here, its game over folks. 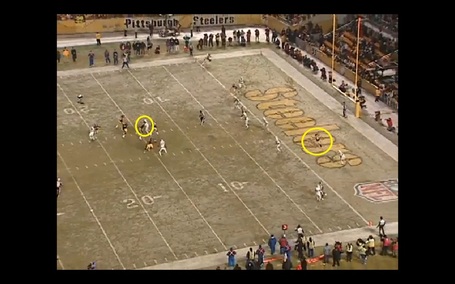 Ellis's pressure forces Ben outside the pocket. Here is where Rex's changes mid-play; According to Daily News writer Manish Mehta, Rex calls the play "Plaster". In other words, when Ben gets outside the pocket, the DB's are assigned to a specific player to cover man to man, circled below: 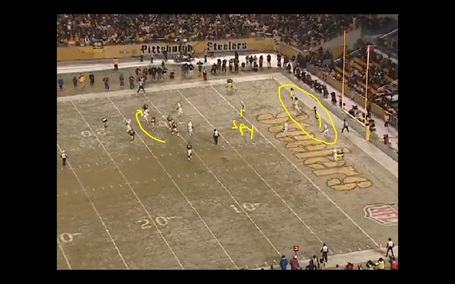 As you can see, each DB is close or right next to a man within seconds. The Linebacker in the middle has a spy on Ben, ensuring he can't make some miracle 10 yard run. Ben runs out of time, and the window to complete the pass is too small, as the pass falls incomplete.