Share All sharing options for: Film Breakdown: How Bad was Rex's Gameplan?

I know, you just want to move past this game. But I just wanted to show an example of how off balance, predictable, and un-Rexy like this defense was Monday night. Let's take a play that would up being about a 50 yard gain by Danny Woodhead. Lets break it down: 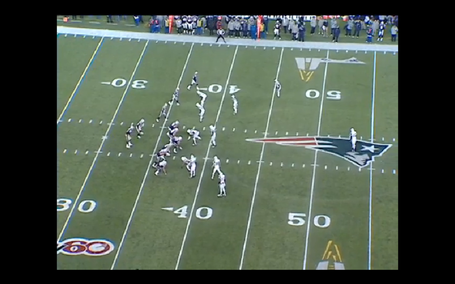 Here, we start with the Pats in trips right, shotgun, single back. The Jets respond with a dime package, with 2 down lineman, single high saftey. Pretty standard Jets D on 3rd and long. Notice the three DB's to Brady's right: It SCREAMS overload blitz, a staple of Rex' system.

Now, this play was probably supposed to be a pass, being it is now 3rd and long. But Brady sees the poorly disguised blitz, and audibles to a draw. 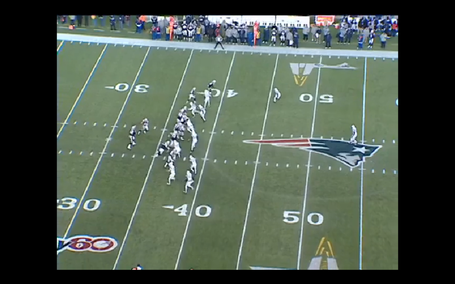 The ball is snapped, and we have four guys covering a blocking TE. Not what you want. On the left side, the side the ball is being run, there are 5 Jets being blocked. everyone else is either playing deep, of covering that blocking TE. You do the math.

Now, here is where Rex looks really out of whack. If you want an overload blitz, putting all of you blitzers where there is only one eligible receiver makes no sense. Now, Gronkowski is a nice player and all, but four guys is a little excessive. This blitz is just horribly disguised and it is ultimately a bad play call.

Find out what happens, after the jump: (Although you can probably figure it out) 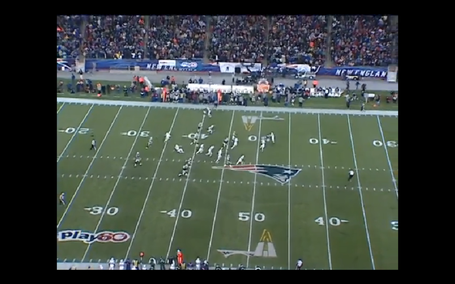 Seconds later, Woodhead takes advantage of the numbers advantage, combined with some nice blocking by his recievers. Its kinda tough to see, but check the block the Pats guy is laying on the Jets saftey around the 50. He holds this block for a while, and Woodhead takes it for a huge gain.

What do we take from this? I think Rex was just out of his mind this game. I have confidence he'''ll get this figured out. However,  it is comforting in that this loss was terrible mostly because of bad play calling, which is certainly fixable, especially with someone like Rex. If would be much more concerning if this was a result of a lack of talent, which doesn't appear to be the case.