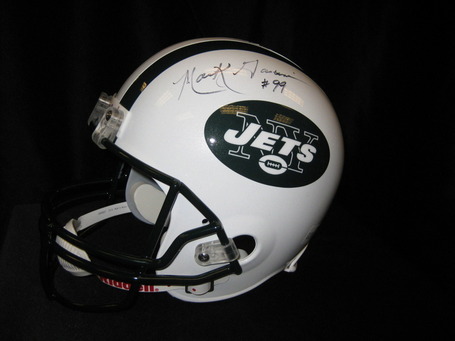 The 2010-11 New York Jets have currently recorded 27 sacks, and are on pace to pull in 36 this season. Imagine this, former Jets All-Pro DE Mark Gastineau did it 74 times, in only 10 seasons. That's a NY Jets record that likely won't be broken any time soon.

Gastineau was the member of the Jets' vaunted defensive front, otherwise known as the "New York Sack Exchange." Gastineau, Joe Klecko, Marty Lyons and Abdul Salaam comprised this unit, and combined for 66 sacks in 1981.

In 1984, Gastineau recorded 22 sacks en route to being named Defensive Player of the Year. This record stood for 17 seasons, until New York Giant Michael Strahan broke it in 2001.

So what about the contest?

Good question. In case I haven't stressed it enough, MetLife Central is changing the game experience for sports fans and offering them opportunities which no other corporate sponsor will provide.

MetLife Central Is one of four cornerstone sponsors at New Meadowlands Stadium, providing fans with contests, giveaways and interactive experiences at every Jets or Giants home game.

Don't believe me? Well, thanks to them, we have an autographed Mark Gastineau helmet (pictured above) that one lucky GGN'er will win this weekend.

All you have to do is sign up for a Countdown Card, and you can do so (here). They're free and will cost you absolutely nothing. You can sign up online, or in person at NMS (NOTE - All personal information used to apply for a Countdown Card is confidential.).

This contest is FREE to enter; the only requirement is entrants MUST have a Countdown Card to participate.

The Jets play the Miami Dolphins on Sunday, Dec. 12. They will likely look to pressure QB Chad Henne often. In honor of the "Sack King," Mark Gastineau....

Tell us who will lead the Jets in sacks on Sunday, as well as how many sacks the player will record.

In your answer, please include the following:

The contest will close on Sunday, Dec. 12, at 4 p.m.. The winner will be announced the following day, on Monday.

For the complete listing of RULES surrounding this contest (tiebreakers, extra rules, etc..), please click here and consult (this FanPost)

Good Luck! And thank the kind people at MetLife Central for sponsoring this amazing contest! PLAY LIKE A JET!