Share All sharing options for: ATTN: Mark Gastineau Will Be at Tomorrow Night's Game, Signing Autographs 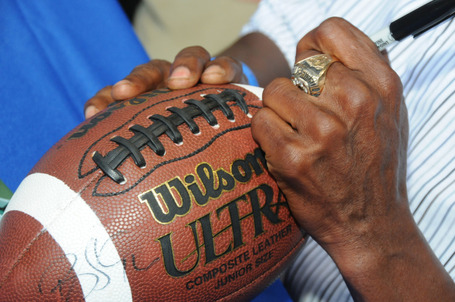 Thanks to MetLife Central, five-time Pro Bowler DE Mark Gastineau, will be at Monday night's game against the Vikings signing autographs for fans.

Head over to MetLife Central (located in the southeast corner of the stadium, steps away from the new Meadowlands train station) for a chance to meet Jets great, Mark Gastineau, and get his autograph!

Gastineau will be signing on-stage at the MetLife Central Plaza from 7:00-7:45pm.

Jets' fans, it would benefit you greatly to sign up for a Countdown Card at www.MetLifeCentral.com to win great prizes throughout the season. You can also get updates about prizes and upcoming events at MetLife Central by following them on Twitter (@MetLifeCentral) and Facebook (http://www.facebook.com/metlifecentral). If you like free stuff, you'll want to sign up.

If you're going to be in attendance, stop by and get an autograph!