Sanchez ruled OUT for this weekend's game, Clemens to start

Share All sharing options for: Sanchez ruled OUT for this weekend's game, Clemens to start

FLORHAM PARK, N.J. (AP) -Mark Sanchez will sit out the New York Jets' game at Tampa Bay because of a sprained right knee. Kellen Clemens will start in his place.

Coach Rex Ryan says he made the decision to have Sanchez not play after seeking the advice of team doctors. Ryan says Sanchez was upset by the decision, but the coach says it was in the rookie quarterback's best interest, as well as the team's.

Sanchez sprained the posterior cruciate ligament in the knee while diving for a first down in the third quarter of the Jets' 19-13 win against Buffalo last Thursday in Toronto. He had started every game this season.

Clemens will make his ninth NFL start Sunday, and first since 2007. 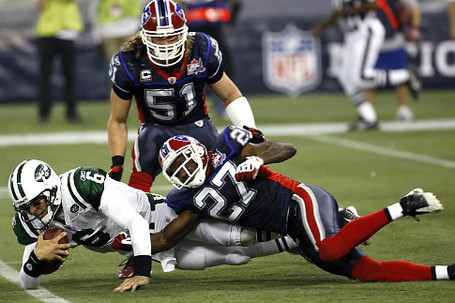