Share All sharing options for: Sanchez to bounceback today? 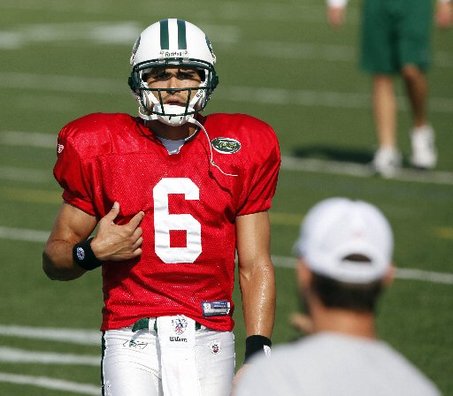 It's been a long week for Mark Sanchez.

Still feeling the hangover from his 5-turnover nightmare he suffered in Foxborough, in returning to practices this week the kid was forced to learn a code system designed to help him make better decisions with the football.

His performance in today's game against Carolina will obviously reflect how well-adjusted he is to the system. However, Rex certainly didn’t beat around the bush regarding how he fared compared to the rest of the season:

"I think he’s had his best week of practice"

When asked how that will carry over to the Carolina game, Rex answered with:

For Sanchez, ball security and making smart decisions with the football were the themes in practice this week. A new drill was brought into the mix in order to help reinforce when he should throw the ball out of bounds if being pressured. Offensive coordinator Brian Schottenheimer explained his intentions regarding this drill:

"If we can get him to say 'uncle' and make good decisions when some of those situations present themselves, then we'll clearly be ahead of the curve,"

Coming off arguably his two worst performances of the season (against Buff and in NO), Sanchez followed those games with QB ratings of 87.5 and 114. He also failed to throw an INT in either of those games. Albeit, the competition was weak as it was against OAK and MIA,  but his response to adversity was impressive nonetheless.

So the question for today--- how will he respond coming off (statistically) his third-worst outing of the year? If the trend continues, he will bounce back tomorrow. But with the new code system and all, the kid has a lot on his plate...

...Like we say here at GGN. Right now, we're not looking for a playmaker, just a game-manager....